A couple of weeks ago my son and I visited Scadding Court Community Centre to embark on our first fishing experience… in a pool. Scadding Court is a community centre that services the Queen West and Dundas Street/Bathurst Street neighbourhood, where we’ve built two new high-rise and townhouse communities, in partnership with Toronto Community housing Corporation (TCHC).

I had learned about the indoor fishing opportunity at the Scadding Court Scholarship evening a few weeks prior. The scholarship evening set an amazing reminder, to everyone present, about what community is really all about. It was extremely well attended, with representation from local residents, city councilors, students, members of the local police and others industry representatives, such as ourselves, that have joined the community and are participating in the revitalization of Alexandra Park.

My role that evening was to present scholarships to graduating high school students. As with most presentations, rule #1 is to know your audience. Not only did I study the impressive bios of the young men and women receiving awards, but I also did an informal “study” of the Scadding Court Community. I quickly discovered what’s important to them. To support people. To support families. To strengthen their community. To strengthen our city. I shared with the audience that my learnings facilitated an instant personal connection. Because not only were these things important to me, but also to my family and to our organization. It’s easy being in the company of people who share similar values to your own. Values such as family and community, which stem from our founder (and my grandfather) Jack DelZotto.

I shared some insight from a recent article I came across emphasizing that it was the people that were born in the early 20th century that were true pioneers – and that were the first real community builders. Just like my grandfather, they planned and envisioned a future better than the lives they themselves lived. They left legacies that we can continue to build on and there’s no reason that even the generations that follow can’t be modern day pioneers. We can continue to look for ways to have an impact on each other and the future generations of the communities we are a part of.

Everyone in the room was in silent agreement that community development is about more than buildings. It’s also about releasing the potential of its people. And the people that were amongst us that night, particularly the young community members receiving awards, preparing to enter post-secondary schools to hone their talents, demonstrated incredible potential. Potential so deep, that my only regret was that my own three sons weren’t there to be inspired by such charismatic, promising and dedicated young members of our society. Young men and women that thankfully demonstrated a work ethic and attitude which contradicted much of what you read or hear about their generation these days.

Fortunately, it wasn’t a one-off. And what I witnessed that evening exists every day in that community. And the indoor fishing opportunity gave me a second chance at sharing it with my own six year old son, Liam. 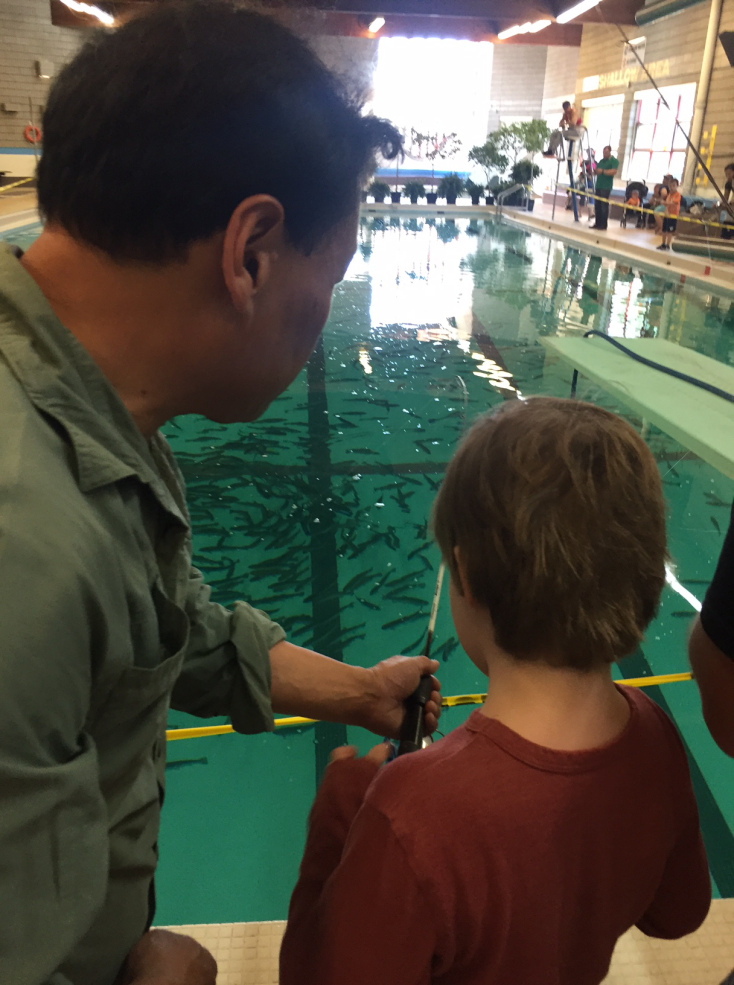 The first lesson, an informal invitation by Executive Director Kevin Lee, of Scadding Court Community Centre to come by the indoor fishing in a couple of weeks, was in essence what allowed for all the other learnings to take place. This initial demonstration of generous hospitality merely set the tone. Quite honestly, it was a stark comparison to the “open house” concept we’re all too familiar with in today’s real estate world. It would be better described as an “open house with an open heart.”

Rather than hundreds of trout in a swimming pool being my first thought of disbelief, it was amazement at the astonishing number of volunteers. And not merely volunteers that were filling hours, looking at their watches in anticipation of leaving. Volunteers with enthusiasm and patience. Volunteers that wanted to be there… that wanted to give back. In a world where people’s attention and time are most scarce, these volunteers wouldn’t have rather been anywhere else, even on a Saturday. You could see that this and their community mattered to them. GIVING BACK TO YOUR COMMUNITY IS IMPORTANT.

Another sense of surprise came upon me right after spotting Kevin’s familiar face in the crowd. I couldn’t believe that upon our spontaneous arrival, in a day of strictly prescheduled, i-cal determined days, not only did Kevin remember me, he warmly escorted us to the swimming pool, befriended my son Liam, set us up with our rods and bait, and led us to fishing expert Gary Hodge, for a quick lesson that would gear us toward success. It worked! We had success x3 and brought home a fish for each of his brothers. WELCOMING FRIENDS WELL CAN MAKE THEM FEEL VERY SPECIAL.

In the Community Centre kitchen I learned quite quickly that my son has a stronger stomach than I do, and doesn’t mind seeing the raw culinary steps that take the fish from “pool-to-plate.” My son decided he would pack up his brother’s trout for dinner but eat his own right on the spot, for lunch. He had it cooked by a Scadding Court merchant’s bbq just steps outside. As we waited, Mr. Lee (now BFF’s with my son) treated Liam to his first tapioca bubble tea, as it was a hot, summer day. Fortunately I have a son with an adventurous palate, and he’ll try anything, as long as there’s someone there to nudge him to try. Kevin had that way about him, and with each tapioca bubble that crawled up my son’s straw and slid down his throat, he looked at Kevin for reassurance that this was a good thing. TRYING NEW THINGS CAN LEAD TO GREAT DISCOVERY.

When the fish was ready, we sat at a communal table outside to enjoy it. Kevin attended to each detail, even adjusting the umbrella to give Liam sufficient shade. Mr. Lee kindly carried the weight of the conversation. He invited my son to bring his whole class next year to the fishing pool. That led us down the path to more conversations about school, friends and fishing. Other people sat down beside us and enjoyed some food, drink, shade, and conversation. SHARING A TABLE AND SHARING FOOD WITH PEOPLE IS FUN. 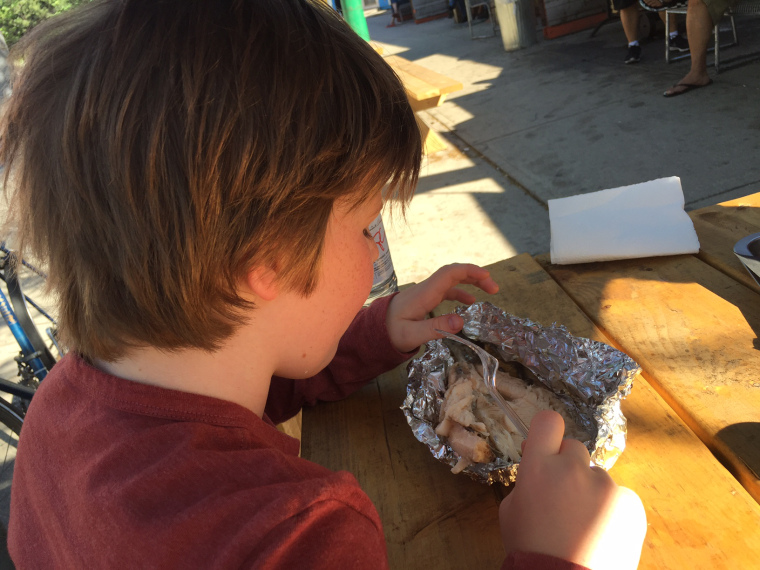 When our food was done, it was almost time to go home. But not before Kevin was able to give Liam another fascinating experience that would allow him to reconsider where food comes from. He gave Liam a tour of his Aquaponics exhibit, in recognition of the importance of “food justice” for all. This showed us how plants and fish can grow together to grow healthy food. Again, Liam was nudged to try something different. LEARNING ABOUT THE IMPORTANCE OF HEALTHY FOOD CHOICES IS INTERESTING. 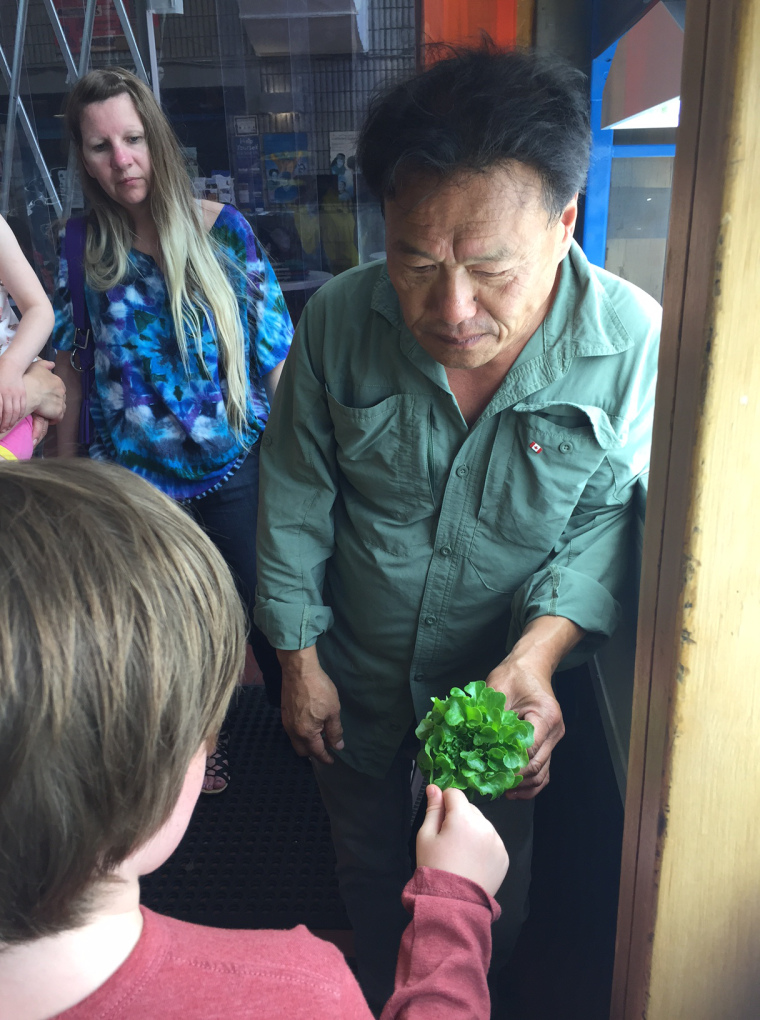 We said our farewells and thank you’s to Kevin but not before he had the chance to extend the invitation to come back tomorrow, for a private fishing event, exclusive to the Community Centre employees. He told Liam that if it was as hot as today, he’d be bringing his swimsuit to jump in the pool with the trout to cool off… Liam could bring his too. Liam laughed out loud. No small feat.

As we passed some other tables with people enjoying the beautiful day, a lady called out to Liam asking how he enjoyed the fish. Her friend interjected and reminded my son, “It’s okay not to like something honey, don’t worry.” She continued and said, “You’d probably rather have a big mac and fries, huh?” A smile spread across his face. ADMITTING THAT YOU DON’T LIKE SOMETHING IS OKAY.

On the way back to the car, my son saw a fascinatingly inked young man escort a visually impaired woman by the arm into a convenience store, counting each of the three steps that led her to the door. When he released her arm, we saw that he himself, stopped and smiled. Liam stared in silence. BEING KIND & OPEN TO PEOPLE MAKES YOU FEEL GOOD TOO.

On the drive home, my son asked if Kevin was famous, after all, he said, “Everybody knows him.” While Mr. Lee does have a strong, charismatic, almost “movie-star” persona, I explained to him that Mr. Lee’s fame was of a different kind. One that was based on really important values, on necessity and putting people and their needs first. I explained that he was like the heart of a body, which was really important to keep everything functioning properly. The Community Centre similarly, is central to the neighbourhood, and to the community. It brings people together and keeps it functioning properly. And his new friend Mr. Lee was a very big part of that. HAVING A PERSON OR PLACE THAT CONNECTS EVERYTHING IS VITAL. 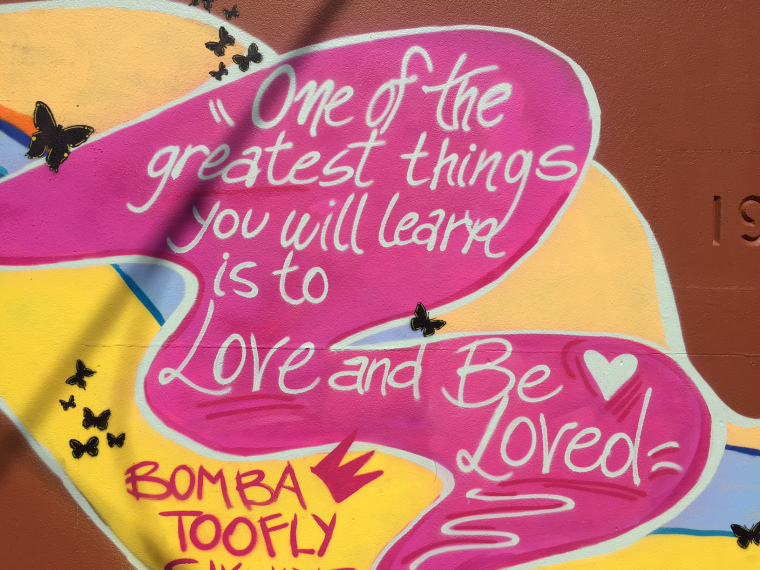 When I tucked my son into bed later that night, he talked about all of the fun we had in just a few hours while visiting a new community. We talked about what made the Community Centre feel so special and all of the lessons we had learned that day – highlighted in capitals above. And when leaving his room and asking what the small packed bag that I tripped over was for at the foot of his bed, he said, “Don’t you remember Mom? I’m going swimming with Kevin and the fish tomorrow.”

We love this blog and really wanted to include it on our site. But we need a disclaimer. So here goes: From time-to-time, the Tridel.com site hosts guest bloggers. The views, opinions and positions expressed within these guest posts are those of the author alone and do not necessarily represent those of Tridel Corporation. All information and data provided on guest blog posts is for entertainment purposes only. The accuracy, completeness and validity of any statements made within this article are not guaranteed. We accept no liability for any errors, omissions or representations. The copyright of this content belongs to the author and any liability with regards to infringement of intellectual property rights remains with them.

Tridel Wins Ontario Builder of the Year, Awarded by the OHBA.

Classic Series I and II at The Well Reach Full Height.

Tips to Help You Transition from a House into a Condo.

* Prices, specifications, sizes, floorplan, keyplate & occupancy are subject to change without notice. Maintenance & taxes are estimations only and are finalized on condominium registration. All dimensions are approximate and subject to normal construction variances. Dimensions may exceed the useable floor area. Actual usable floor space may vary from the stated floor area. Furniture is displayed for illustration purposes only and does not necessarily reflect the electrical plan for the suite. Suites are sold unfurnished. Balcony and Façade Variations may apply, contact a sales representative for further details. Furniture, BBQs and planter locations on terraces are for illustration purposes only and subject to change. E.&O.E. 2022.

Tridel is Canada’s Leading Developer of New Luxury Condos
In the Greater Toronto AreaLooking to buy a new condo in Toronto? Find the latest news on new luxury condos for sale in Toronto and stay up to date with prices, floorplans and useful articles for the new home buyer. Already own a Tridel condo home? We offer information on our award-winning customer care, tips on home maintenance and useful articles.