A Shared Vision and Commitment

So far, this shared purpose between TCHC, the community and ourselves has led to the completion of the first block of new townhomes, which officially opened in September 2016.  The event was celebrated with a community street party and ‘open house’ of several of the new townhomes, which allowed other residents to see what their future homes would look like. 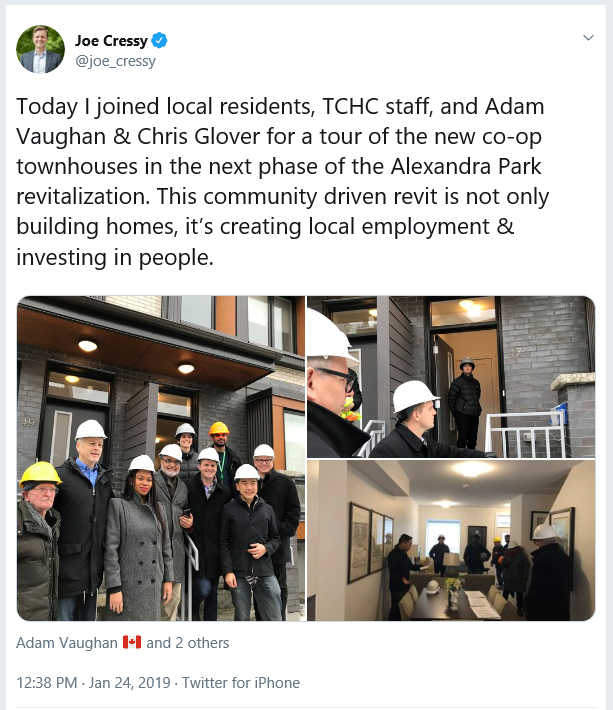 Looking to the Future

Now, as we approach occupancy for the second block of townhomes, we were happy to accompany TCHC, community residents, and representatives of three levels of government, for a tour of the next phase of the community.  Led by Michael Lam of the Toronto Community Housing Corporation, the tour included a walk of Phase 1b of the Alexandra Park revitalization.  This latest phase consisted of two blocks of TCHC townhomes and the tour included a walk-through of a furnished model home.

MP Adam Vaughan, City Councillor Joe Cressy, and MPP Chris Glover, also attended the tour.  Both MP Vaughan and Councillor Cressy have strong ties to the community and have been working closely with community members over the years to ensure they remained a strong voice in the planning of this revitalization. 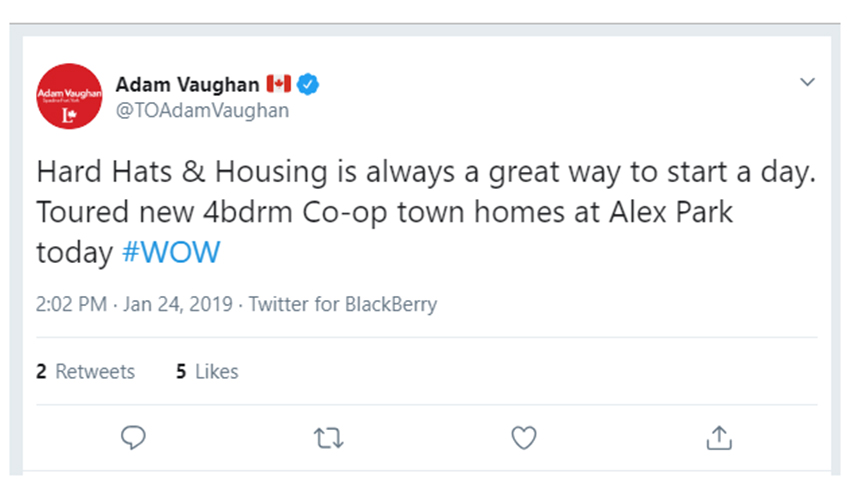 It began with an idea.  To revitalize an important neighbourhood in the heart of our city.  Literally and figuratively breaking down walls and embarking on a major revitalization of Atkinson Co-op and surrounding areas of Alexandra Park.  In the spirit of Sonny Atkinson, a community leader who first began demolishing physical barriers to help build a better community, the revitalization development is an opportunity to connect this vital community to the surrounding neighbourhoods, provide better housing and improve the quality of life for all of its residents.

This is not the first time the neighbourhood has seen a fundamental change.  The Alexandra Park community has a rich history that is in many ways reflective of the story of Toronto itself.  The neighbourhood was first home to Sir Casimir Gzowski, a Polish engineer who immigrated to Toronto in 1841 and eventually built a large home, which he simply called “The Hall,” at what is now the southeast corner of Dundas St. W. and Bathurst St.*   Eventually, a thriving community grew up around Sir Gzowski’s home.  In 1904, the City of Toronto purchased “The Hall” and its surrounding land for use as a public park, which it subsequently named ‘Alexandra Park’.

In the 1960’s, the neighbourhood was again transformed, when the City of Toronto approved plans that saw the expropriation and demolition of many of the surrounding homes to make way for a public housing community, which became home to a generation of new Canadians and other Torontonians.  It is a common story in our city and our country.  And it is a story that Tridel, founded by Jack DelZotto on a commitment to build a better city by developing strong communities, shares.

More media on the Revitalization:

How Master Plans Give Us Unique Opportunities to Shape the City

* Prices, specifications, sizes, floorplan, keyplate & occupancy are subject to change without notice. Maintenance & taxes are estimations only and are finalized on condominium registration. All dimensions are approximate and subject to normal construction variances. Dimensions may exceed the useable floor area. Actual usable floor space may vary from the stated floor area. Furniture is displayed for illustration purposes only and does not necessarily reflect the electrical plan for the suite. Suites are sold unfurnished. Balcony and Façade Variations may apply, contact a sales representative for further details. Furniture, BBQs and planter locations on terraces are for illustration purposes only and subject to change. E.&O.E. January 2020.