Under Ontario Law (OBC, 1997, 7.6.4.2), toilets installed in new homes can use a MAXIMUM of six litres of water per flush. These toilets became mandatory in new homes in 1996, and are also known as “low-flow” toilets. Here’s an evolution of the flush.

Complaints against low flush toilets include sluggish or incomplete flushing; a small “water spot,” as the area of the toilet-bowl water surface is called; staining; and the need to double-flush or triple-flush. Critics say that if a toilet is flushed more than twice, it’s defeating the purpose. Whether or not this be the case – they’re here to stay and here are some suggestions on living with it

The Right Way to Plunge a Toilet

Everybody with a low flush toilet has a plunger. According to Terry Love, there’s a right and a wrong way to use a plunger, and most people require some brushing up on their plunging skills.

Put the plunger in with water in bowl, and after a series of short, quick strokes, pull up until everything sucks down. Usually people do big strokes up and down. Using that method, some blockages won’t move.

What’s it all for?

Although plumbers and the public complain about the way new toilets flush, plumbing regulators say that the latest generation of low flush toilets work just fine. These toilets are here to stay, so we’d better get used to them- -Patrick Higgins is a licensed plumber and chairman of the ASME/ ANSI Plumbing Fixture Committee. Higgins claims it’s a matter of getting used to the product and not using the toilet as a waste basket. What the public needs isn’t more water but more education, they say. We have to learn that toilets are only for No. 1 liquid waste, and No. 2, faecal waste.

How long should the parts inside a toilet tank last?

The answer is, “It depends.” The replaceable parts such as flappers and the washers or seals inside a refill valve in some toilets may last several years. If your water is chemically treated, if you use a bowl cleaner in the tank, if you have high water pressure,the parts are likely to disintegrate sooner. If you touch the flapper and get black on your hands, that’s a sure sign the parts need replacing.

People would leave on vacation and return to find that their toilets were leaking, because the rubber gaskets and washers had disintegrated. The problem turned out to be caused by some of the toilet tank additives that worked fine as long as the toilet was used regularly. But when allowed to sit unused for long periods of time, the chlorine concentration would keep getting stronger and stronger.

When away for extended periods, you should have someone periodically run your plumbing for toilets and faucets.

What To Do When Water Starts to Rise

Watching water rise to the top edge of a toilet bowl is disconcerting to say the least. But in most cases the water will stop running before overflowing. Many toilet bowls are designed in such a way that they will usually hold the entire contents of the tank without overflowing. But that’s only IF the water level in the bowl was at its normal height before the toilet was flushed.

When confronted with a bowl that is overflowing, quickly turn the water off under the tank prior to plunging. (This assumes the problem is a clog in the toilet.)

If you’re unsuccessful with the above, you may decide to call a plumber. Keep in mind that if the damage is a result of the homeowner, you will be liable for any charges incurred.

Obvious signs of a leaking toilet:

What Makes a Toilet Bowl Flush?

Know how to turn off your water supply. The MAIN SHUT-OFF turns off all the water to your entire home; MAKE SURE IT WORKS. You will need it in an emergency AND/OR when you don’t have an individual shut-off under fixtures. When you have used one of the small shut-off valves under a toilet remember to turn it back on.

Keep in mind that the shut-off valves tend to become stiff since they are seldom used, and left in the same position for long periods of time.

Anatomy of a Toilet 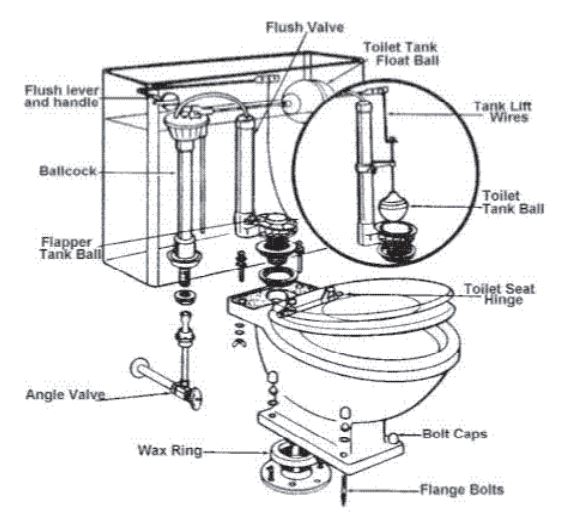 Get a sneak peek of the move-in-ready suite at Bianca.

How to Become a Better Ally to 2SLGBTQ+ Communities.

Inside the Two-Storey Model Townhome at Aquabella

* Prices, specifications, sizes, floorplan, keyplate & occupancy are subject to change without notice. Maintenance & taxes are estimations only and are finalized on condominium registration. All dimensions are approximate and subject to normal construction variances. Dimensions may exceed the useable floor area. Actual usable floor space may vary from the stated floor area. Furniture is displayed for illustration purposes only and does not necessarily reflect the electrical plan for the suite. Suites are sold unfurnished. Balcony and Façade Variations may apply, contact a sales representative for further details. Furniture, BBQs and planter locations on terraces are for illustration purposes only and subject to change. E.&O.E. June 2022.